2MIA FM Board of Management 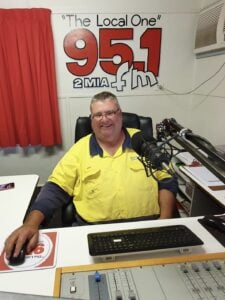 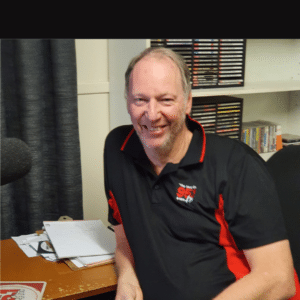 We are a small not-for-profit community radio station broadcasting live and recorded programs across the Murrumbidgee Irrigation Area (MIA), in Griffith NSW, Australia. We also stream live to the world via the internet.

We do outside broadcasting at a variety of public events throughout the year. We have the capability to setup an outside broadcast station where there is a reliable power supply. Our equipment and expertise is exceptional and we take pride in what we do.

If you are a local business or not-for-profit organisation wanting to get your message out into the community, contact us to find out more about our outside broadcasting services.

2MIA FM transmits on frequency 95.1 mhz through a 1000 watt transmitter located on Scenic Hill, Griffith, near the Pioneer Park Museum.

Griffith Community FM Association Incorporated also known as “2MIA 95.1FM” was first conceived in 1987. At a General Meeting on January 20th 1988 the station members discussed proposed locations to start the station. As you will read later, the station went through many locations before settling in its current location.

In June that year it was decided that the station would begin test broadcasts at the Pioneer Park Museum on Scenic Hill, Griffith. The stations first test broadcast ran from 6:30 am to 12:00 midnight on the days of Friday 5th, Saturday 6th and Sunday 7th August 1988 on FM frequency 103.3 MHz at Pioneer Park.

The station then conducted a second test broadcast between the 17th and 23rd January 1989 at the Victoria Hotel. A third test broadcast went to air between Thursday 23rd March and Wednesday 29th March 1989 still broadcasting on FM 103.3 MHz At a general station meeting held on the 14th March 1990 it was decided GCR-FM Association (now 2MIA FM) would share a transmitter site with the SBS on Scenic Hill. In July 1990 the station applied for a permanent broadcasting licence. Another test broadcast was conducted for one week from Saturday 22nd September 1990. This was the stations most powerful broadcast so far broadcasting for the first time into the townships and villages of Goolgowi, Darlington Point, Leeton, Coleambally and Narrandera. This was also the first Stereo transmission conducted by Griffith Community FM Assoc.

On 20th December 1990 the station was loaned a temporary 100 watt transmitter by NEC.

As of January 7th 1991 the station was still broadcasting from the Victoria Hotel.

In September 1992 the station finally received it’s fulltime broadcasting licence. At this stage it was common for stations to go through 10 years of trials before being granted a licence, this station received ours after 5 years.

A Radio Station Is Born

The station officially opened in April 1993 and started broadcasting full-time then. At that time the station was broadcasting on a 500 watt transmitter, however in 2002 2MIA FM moved to a 5000 watt transmitter making it one of the most power community radio stations in New South Wales. In 1994 2MIA FM set up a brand new mixer in the studio which was used until 2012. In 2012 we upgraded to a better, more modern mixer. Check out the gallery for pictures.

In mid-1994 the station moved to PCYC Griffith.

Over the years the 2MIA Studio has been used for training by TAFE students, the found documented was in 2002.

In 2003 the committee moved into the “Rugby Union Club House” in Groongal Avenue (our current premises).

In 2011 we began increasing the technology our station uses by starting a temporary radio stream. Due to a number of issues with this stream, we’ve had to change it several times. In 2012, we launched a new stream, which is embedded into this website.

In 2012 we starting building a brand new website, built from scratch, from the ground up by station member Bob Brewer.

In 2012 we also purchased parts, and station technician Josef build two brand new on air computers, which will be used with a new radio mixer and outside broadcasting box purchased in the same year.

In 2020 we have continued to strengthen the current website with the assistance of local business Straight Lines Design and Marketing.

In 2022, the Community Broadcasting Association of Australia released the Community Radio Plus App which is a one-stop shop for listeners to hear community radio. It features community radio stations nationwide and champions our sector’s rich and diverse content to listeners everywhere. The app is available for download from Google Play and The App Store.

We look forward to sharing more station milestones as they happen. in the mean time, we thank you for reading about 2MIA FM 95.1!

By becoming a 2MIA FM member you are helping provide a quality service to the local community.

Supporter Memberships are new to 2MIAFM in 2018 and are designed for people who are interested in supporting the station but do not want any direct decision-making responsibilities in the day to day operations of the association. Supporter Members receive a special ‘Supporter Membership Pack’ as a thank you!

There are many different areas you can help out around the station, from being an on air personality, station management roles, secretary, technical, and many other things. Just get in touch, and we will find a way that you can help us.

To become a full or supporter member, print out and fill in this form. You can email it, post it, or drop into the studio. Membership fees are affordable, Full membership costs $35.00 per year, plus a $15.00 joining fee and Supporter membership is $20 per year with the same initial $15.00 joining fee. EFT details are provided via the form.  So if you would like to get involved, either on air, behind the scenes or as a 2MIAFM supporter, contact us.

We are a proud member of

We acknowledge the support of